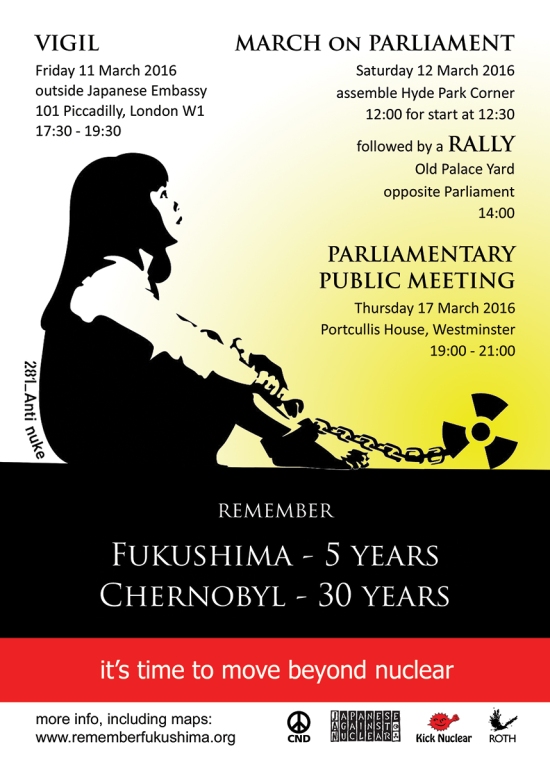 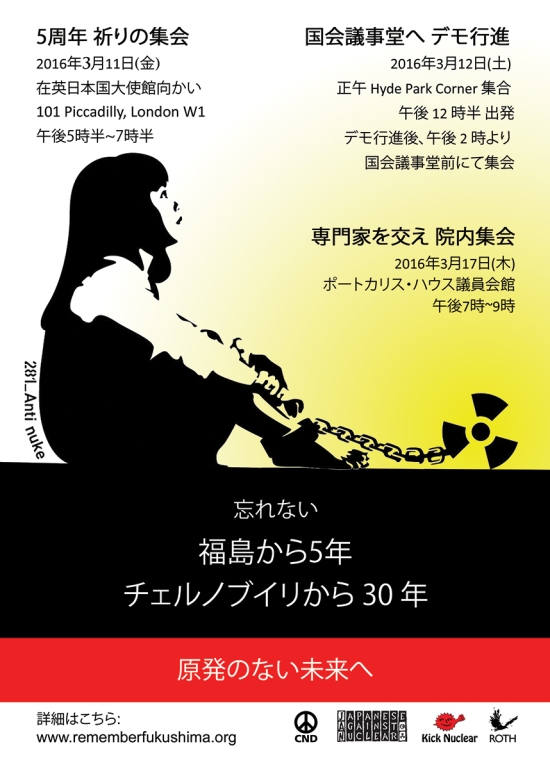 NAGASAKI DAY AUGUST 9th
.
On 9th August, from 6.30-7.30 pm, an ecumenical service organised by Pax Christi (020 8203 4884) will take place at Sacred Heart Chapel, situated on Horseferry Road, SW1P 2EF, in memory of the 72nd anniversary of Blessed Franz Jagerstatter’s execution in 1943 for refusing to serve in Hitler’s army. Franz Jagerstatter was beatified in October 2007. Following the service, there will be an interfaith Peace Walk to the London Peace Pagoda in Battersea Park for a Floating Lantern Ceremony. This will begin at dusk to commemorate the 70th Anniversary for victims of Hiroshima and Nagasaki and all wars.
The ceremony seeks to reflect on the horrors of war in an atomic age and to pray together for peace and harmony between all people and nations.
All are very welcome to join and offer flowers and incense.
.
Contact Nipponzan Myohoji: Tel: 020 7228 9620
.

3rd Anniversary of 3.11 vigil/protest in front oF the japanese embassy, London

Himawari JAN UK, Kick Nuclear and CND are planning to organise the monthly READ-OUT of the protest statement to the Japanese Prime Minister Shinzo Abe and send the protest statement to the President of TEPCO on Fukushima Daiichi Nuclear Power Plant disasters since 11 March 2011.
.
We will start our protest vigil from 10:00am and the statement read-out from 11:30 am on 7th August 2015 ( Friday ) in front of the Japanese Embassy.
.
Anti-Nuclear Power speeches/songs/poems are also very welcome.
.
The READ-OUT to TEPCO does not take place from this month as their office at Berkley House is moved to the unknown location last week. However, our protest statement will be sent to the TEPCO Head Office in Tokyo, Japan.
.
Venue: In front of the Japanese Embassy.
Nearest station: Green Park ( Piccadilly Line, Zone 1 ), 3 minutes walk towards Hyde Park.
Date and Time : 7th August 2015 ( Friday ) from 10:00 am till 12:30 pm.
.
for more information click here
.

By the Commemorative Cherry Tree in Tavistock Square, London WC1

This ceremony is held annually by the cherry tree planted in the Square in 1967 by the then Mayor of Camden, Cllr. Millie Miller, in memory of the victims, past and present, of the atomic bombs dropped on the Japanese cities of Hiroshima and Nagasaki on 6th and 9th August 1945.

Kick Nuclear have will hold two leafletting sessions outside the Treasury underlining just how terrible a deal it is and congratulating them on their stand.

Kick Nuclear supports the Stop Moorside demonstration outside of Whitehaven Civic Hall on Saturday May 16th, 2015